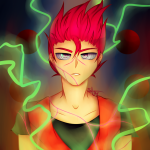 Active 1 week ago
@gabriel_31 Hey m8 I know how to do the custom commands and I know how to get your stats above the cap, but due to your spam across all the forums I will not be sharing this information with you. 🙂 View